We are, “The Ships Cookbook” created in 2015 for the purpose sharing knowledge about cooking on-board ships.

Our Vision is to communicate knowledge and understanding in food production on-board ships, our history and knowledge has been gained  from many types of ships mostly on busy offshore dive support vessels which serve the oil industry all over the world, often with multinational crews and clients on-board. we have experience on all manor of vessels, including ;-

We hope in time to expand and offer greater insight the wider picture of running catering operations on-board ships. We have a huge project ahead of us, and we will do our best to create a useful resource.

We thank you for taking time to visit our web-site.

We are also known as “The Ships Cook Book Company”.

The Ships Cookbook web-site was launched in April of 2017

How the Recipes featured on this web-site were developed 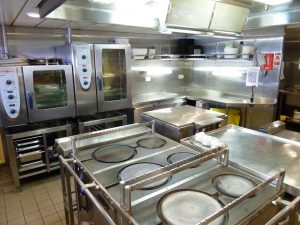 The original idea behind recording and photographing this collection of recipes started with a very humble objective: it was to be a collection of recipes created to help the cooks I worked with. There was no intent to create a recipe book or web-site in the beginning, it was my intention to have a collection of recipes in a folder in the galley (on an Offshore Dive Support Vessel) (DSV) so the cooks could look at the folder at anytime, indeed in the beginning the recipes were very basic, sometimes consisting of little more then a list of ingredients with just the most basic instructions and methods and no photographs, it was hoped these recipes would help to develop uniformity in the dishes we produced as the cooks learned new dishes from each other, as all cooks and chefs have their own special signature dishes, so the initiative was about creativity, sharing knowledge and team work.

Over time this humble little catalogue of recipes grew so did the level of detail, formatting and presentation, so what started to be a useful tool became and project and a passion

It is common on many ships that you won’t always have the same catering crew, and you can find yourself with new cooks every few months, and I wanted to create a situation were if a dish was enjoyed and popular with the crew last trip it will taste just as good this trip, whilst always allowing the cooks to demonstrate their own individual culinary flare and creativity.

This created a problem for me as cooks around me although extremely capable and talented, they were unable to articulate what they were doing and quantify how much of each ingredient they were using in a way that was suitable to create a written recipe the quantities they worked in were vague, I could hardly write a recipe that said put a bit of this in and 2 handfuls of that, it was just not going to work. So, within weeks it became apparent that what started out as a team effort never got any further than my own contributions and my own personal quest to expand a repertoire of recipes for the team.  However, what did happen was the enthusiasm and interest the cooks showed in the recipes I created, even crew members clients started asking for copies of my recipes.

For a recipe to be suitable for inclusion on this website it needs to meet the following criteria; –

All photographs were taken in the galley during preparation or just prior to service time so the food you see in the photographs was consumed by the crew, so in this respect the recipes that follow also serve as a record to show just some of what the crew ate and what can be achieved.

The recipes are basic everyday dishes there is no fine dining or obscure ingredients involved, often when creating these recipes, I would be in a part of the world where some ingredient or product was not available, so there are times as a ship’s cook when you have to substitute or omit an ingredient because it is not available.

I would like to think these recipes would be of help particularly to students new to the catering industry, to help introduce them to making basic dishes in larger quantities than can be experienced in a collage classroom environment., also many of the recipes involve basic craft skills all young cooks and chefs require as a foundation on which to develop and expand their skills.

I have been very practical in my approach to my work and how I approach each recipe or task, some of the methods may seem inferior in either technique or ingredients to what other chefs in other catering environments may produce. But what I’ve produced is real and is based on a career as a professional Chef, and Manager which now spans some 46 years working in Hotels, Restaurants, Hospitals, Event Catering, and 33 years of that time has been spent on ships of numerous sizes and types. I hope you enjoy working with these recipes and have successful results. We also home you will find the theory essays interesting and informative.