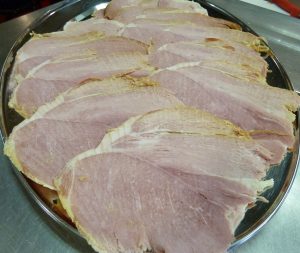 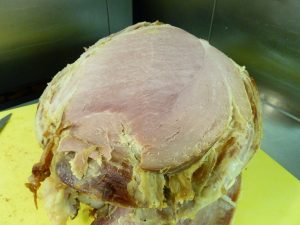 It is surprising how few ships cooks cook fresh ham these days, and yet it is most likely one of the easiest joints of meat to cook, as with all recipes there can be variations but here I will stick to the very basic principles. Ham or Gammon is Pork which has been cured in brine (brine is;- Salt Water) Ham can also be smoked and Un-smoked (un-smoked sometimes referred to as;- Green Gammon). Most hams are cold smoked and some are hot smoked, ham can also be flavoured using smoke from a particular kind of wood such as hickory.

Smoking is sometimes referred to as dry cured. There is also a process using liquid smoke which is a flavouring which is sprayed onto the meat whilst hanging to give the flavour of smoked.

In these notes I will focus on pork which has been wet cured in Brine, Brine has two main functions, firstly it preserves the meat and secondly it flavours the meat, another feature of curing process is that it changes the colour of the meat from grey to pink. As a result of curing some ham can be too salty to the taste; we can overcome this by soaking the raw ham joint in cold water in a large pot for 24 hours prior to cooking, changing the water periodically.

Note;- If you are taking uncooked ham from new supplier you won’t know if the ham is salty or not until you cook it and try it for the first time. When I have hams from a new supplier I don’t soak them the first time I use them I need to see what it tastes like first.

After the soaking process is complete drain the cold water from the ham and fill the pot with fresh cold water and place on the stove.

Bring the water to the boil, and then turn down the heat to a steady simmer, cooking for 20 minutes for every 500grms plus 20 minutes over. A 7kg ham would take approximately 5 hours to cook. (40 minutes to the kg)

A smaller joint of ham say 3kg would take approximately 2 to 2 ½ hours.

Always remove the pot from the stove before attempting to remove the ham from the cooking water and it is wise to allow the cooking liquor to cool slightly so as to avoid splashes and the risk of scalding. It is important to note that a whole fresh ham can be heavy and when it is hot it requires handling with extra care to avoid the danger of scald injuries.

Place the cooked joint on a tray and allow cooling before placing in the fridge overnight to allow it to fully chill. The Next day carefully remove the skin and the fat using a sharp knife, slice the meat across the grain of the meat. An electric gravity feed slicer will produce thinner slices but a good sharp long bladed carving knife will produce nice slices too.

Although called Baked Ham most ham is boiled first and then finished in the oven usually with a glaze or coating added. Although there are recipes for baking ham for the full cooking time in the oven the results are not as good and I prefer the combination of boiling the ham first then coating with a mixture of Golden Syrup and England Mustard before placing into a moderate oven, basting the ham with the syrup mixture during the baking process. The ham has already been cooked and this baking is purely for the purpose of adding the sweet coating and would take less than 30 minutes create a nice coating which should end up slightly brown.

Although Honey Baked is the most common form of baked ham I find that Honey is not sweet enough to get the flavour I want.

Below we will look at a beautiful smoked ham that we took on-board in Ravenna Italy. 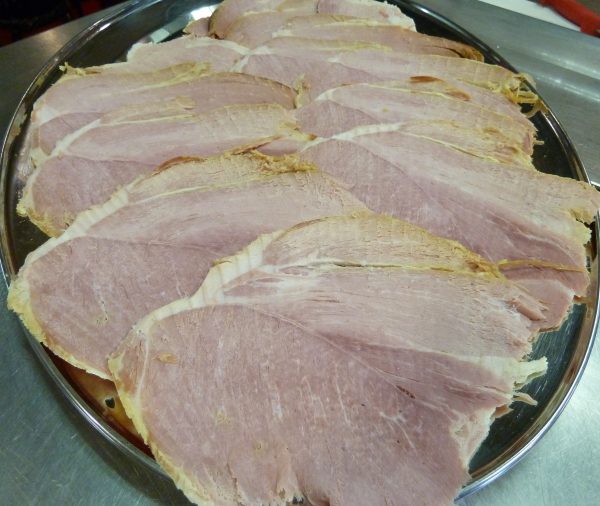